There have been a few pieces of official Time Crisis merch which have been available through various giveaways on Twitter. The most common have been t-shirts bearing the phrase "8 Minute Cape Cod" on the front, with various designs and colors. Time Crisis Honorary Membership cards have also been given away, which mention the Core Values. On November 3, 2019 there was a merch drop of "popcorn and raisins" sweatshirts as a tie-in to Episode 104. Please see the Gallery below for examples.

On various episodes Ezra and the Crew come up with ideas for possible Time Crisis or Vampire Weekend merch. Often these ideas are presented humorously and are not actually considered as a possiblity. These ideas have been:

Despot in the studio wearing a first edition shirt

Sleeve of the tie-dye shirt, featuring the phrase "Tasteful Palette" 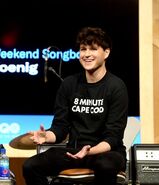 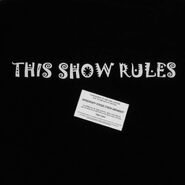 Back of the long sleeve featuring Jokerman font, with membership card 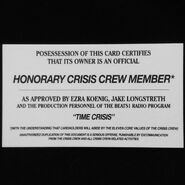 Back of an Honorary Membership card

Custom Mitsubishi brand pencils with the phrase "Crisis Crew". Pencils were given away during Vampire Weekend's May 5th Webster Hall show in New York

"Popcorn and raisins" limited edition drop of 20 to benefit broke vegans
Add a photo to this gallery
Retrieved from "https://the-time-crisis-universe.fandom.com/wiki/Merch?oldid=1524"
Community content is available under CC-BY-SA unless otherwise noted.